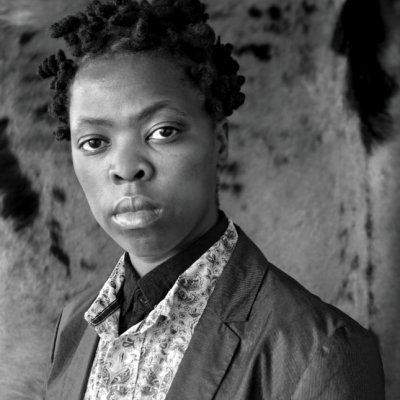 A photographer and self-proclaimed visual activist, Zanele Muholi explores black lesbian and gay identities and politics in contemporary South Africa. For her series “Faces and Phases” (2006-11), Muholi photographed more than 200 portraits of South Africa’s lesbian community. “The portraits are at once a visual statement and an archive,” she has said, “marking, mapping, and preserving an often invisible community for posterity.” Muholi’s sensitive portraits challenge the stigma surrounding gays and lesbians in South Africa, debunk the common rhetoric that homosexuality is un-African, and address the preponderance of hate crimes against homosexuals in her native country. Among other subjects, she has captured the survivors of “corrective rape”. In April 2012, thieves broke into Muholi’s Cape Town apartment and stole over 20 hard drives holding years of photographic documentation, suggesting the continued controversy and sensitivity surrounding the issues that Muholi’s works confront.