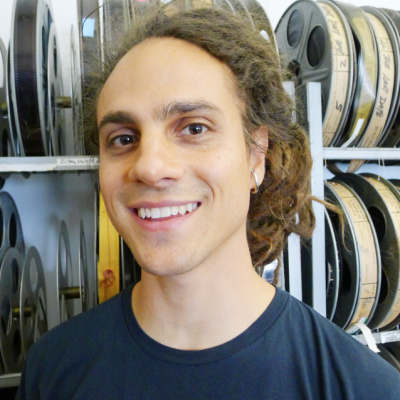 Steve Cossman is founder and director of Mono No Aware; a nonprofit cinema arts organization whose annual event exhibits the work of contemporary artists who incorporate live film projections and altered light as part of a performance, sculpture or installation. In 2010 the organization established a series of analog filmmaking workshops, and has grown to include in their activities an equipment rentals program and an in-person screening series entitled Connectivity Through Cinema. Steve’s first major work on film, TUSSLEMUSCLE, earned him Kodak’s Continued Excellence in Filmmaking award and has screened at many festivals and institutions internationally. In 2013, he completed residencies at MoMA PS1’s Expo 1 and the Liaison of Independent Filmmakers of Toronto. He has been a visiting artist at Dartmouth, the New York Academy of Art, Yale, SAIC, and UPenn. Steve’s newest work on film, W H I T E C A B B A G E (2011-2014), a collaboration with Jahiliyya Fields of L.I.E.S., had its U.S. premiere at Anthology Film Archives. He currently lives and works in Brooklyn as a director, curator, visual artist and member of the collective DecayNY, creating time-based works on film, video, and paper.