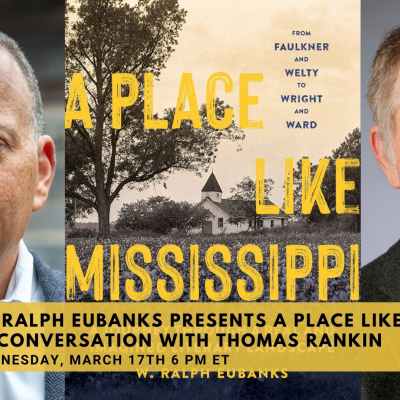 There is a palpable connection to the landscapes of Mis­sissippi displayed in the work of the state’s many lauded writers. This connection to the land runs deep—across onerous lines of class, gender, and race—and spans gen­erations of authors birthed in the Magnolia State. It’s dif­ficult to read Faulkner, Welty, Wright, and Ward and not come away with the very particular sense of place that the state and the greater American South represent in their work.

In A Place Like Mississippi, W. Ralph Eubanks takes readers on a visionary tour of the real and imagined landscapes that have inspired generations of authors. Eubanks is a native Mississippian and he knows its writ­ers and its complicated history well. In A Place Like Mis­sissippi, Eubanks reveals how a little state that rests alongside the banks of a great and mighty river has made so many significant contributions to American letters, carrying an outsized role in the national imagination. The answer lies in a landscape that pairs ordinariness with beauty, magic with madness, and mystery with magnificence.

W. Ralph Eubanks is the author of Ever Is a Long Time and The House at the End of the Road. He has written for the Chicago Tribune, Vanity Fair, Time, the Wall Street Journal, WIRED, the New Yorker, and NPR.

Tom Rankin is a Professor of the Practice of Art and Documentary Studies at Duke University where he directs the MFA in Experimental and Documentary Arts. For 15 years he was director of the Center for Documentary Studies at Duke. Rankin is formerly Associate Professor of Art and Southern Studies at the University of Mississippi and Chair of the Art Department at Delta State University. He is a graduate of Tufts University, the University of North Carolina at Chapel Hill, and Georgia State University. His books include Sacred Space:  Photographs from the Mississippi Delta (1993), which received the Mississippi Institute of Arts and Letters Award for Photography; Deaf Maggie Lee Sayre:  Photographs of a River Life  (1995); Faulkner's World:  The Photographs of Martin J. Dain (1997); and Local Heroes Changing America: Indivisible (2000).  He recently edited and wrote the introductory essay for the book One Place: Paul Kwilecki and Four Decades of Photographs from Decatur County, Georgia (2013). His photographs have been collected and published widely, and included in numerous exhibitions.  A frequent writer and lecturer on photography, culture, and the documentary tradition, he is the general editor of the Series on Documentary Arts and Culture with the University of North Carolina Press.